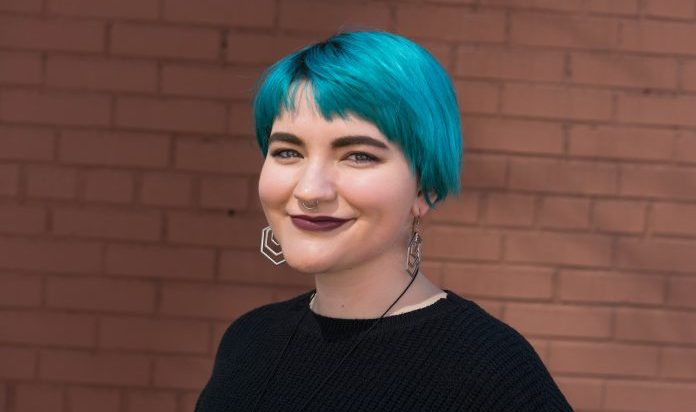 Growing up with her father in IT, Rylie Johnson was always around computers. But it wasn’t until high school that she enrolled in a computer science class of her own. At the time, she wasn’t all that interested.

Years later, after receiving her degree in communications and digital humanities at the University of Wisconsin–Stout, she joined the marketing team of a tech company in Minneapolis. The environment reignited her interest in tech, but Rylie felt constrained by her role as a writer.

It wasn’t until Rylie was let go in a round of layoffs that she realized how much the company had underestimated her. She was determined to prove herself.

The first step? Enrolling in the University of Minnesota Coding Boot Camp.

Rylie was motivated from the start. And despite the resistance to computer science she had developed in high school, she was pleasantly surprised that coding was so different.

Rylie quickly fell in love with JavaScript, and she began to thrive in unexpected realms— excelling at front-end web development, so much so that she won a 2018 Google Developer Challenge Scholarship for Front-End Web Development.

“I didn’t know that I was one of the top students until I got teased for it,” she said, laughing.

Paving the way for other women

Rylie and her female teammates conceived DevNasty as a platform for local female developers to connect and share their experiences. The platform offered events and resources for women just getting their start in tech, including organized meet-ups.

“We even featured a quote board for Random Bullsh*t Said to Women that Wouldn’t be Said to Men. It was a fun idea for us to vent about things that we deal with on a daily basis,” she said.

While completing this project, Rylie was also working part-time for Gruen, a digital marketing agency. Determined to secure a full-time position, she learned the ropes quickly and tried her best to impress her coworkers with creative problem-solving.

It worked. Soon, Rylie found herself on the team full-time as a web developer. So far her experiences have been overwhelmingly positive.

“I went in thinking I was going to have to deal with a lot more as a woman in tech. I’ve been to a lot of networking events and meet-ups, and I’ve actually been pretty surprised with the tech community in Minneapolis,” she said. “Men are very aware that there’s an issue, and they take criticism fairly well. There are a lot more guys here that are likely to stand up for women, so that’s pretty cool.”

While many of her coworkers see her climbing up the corporate ladder, Rylie has a more humble view of her future. She just wants to work on technology that helps people, she said.

Her advice for someone considering a boot camp? Absolutely ask for help instead of spinning your wheels. Also, she recommended forging connections with people you align well with since the boot camp provides a once-in-a-lifetime opportunity to network.

“I firmly believe that people can do whatever they want to do with tech. I hate it when people tell me I can’t do something. I’ll automatically try to prove them wrong,” she said.